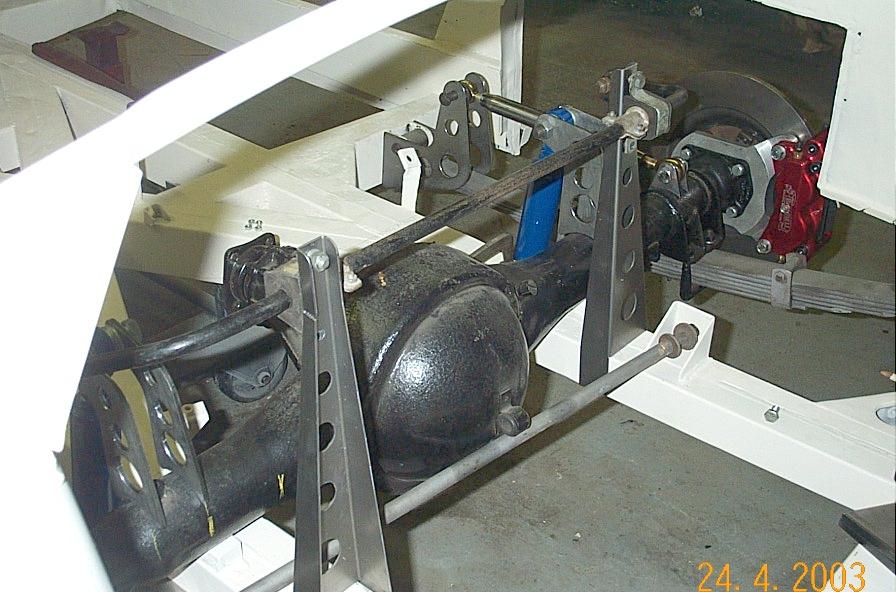 WHY CONSIDER IMPROVEMENTS
Although I seem to have gained a reputation for being somewhat of a Healey modifier I still believe strongly that a standard Healey in good mechanical condition is a fine car to drive and preserve, and I only offer what follows in response to several enquiries that I have had on the subject. I do not consider myself to be an expert, but I have some experience and what follows is based upon that; furthermore I’m sure that most of what I’m going to say will be obvious to those who have considered the subject in any depth but, for those who haven’t, this should be a good starting point .
Because the big Healey is the epitome of a “sports car” it is not unreasonable to think that perhaps it should handle in a sporting like manner.  It is pretty disappointing to take your car out to a friendly gymkhana or similar event and find that no matter how well you drive 1200c.c. rice rockets are completing the course in half the time it takes you and your Healey.  What I’m describing below should result in some respectable improvements and is, for the most part, easily reversible; I’m not advocating modifying the car so dramatically that it looses its classic appeal.

SOME BACKGROUND
Up until 1965 all big Healey’s used the same suspension which dates from 1952. Many of the components were probably designed for a cars built immediately after WWII.  The rear suspension of the big Healey is an interesting study in design compromises. In the interests of styling and to minimize manufacturing costs Donald Healey opted to use a rather outdated “under slung” ladder frame for the 100. I’m pretty sure that the Healey was the last mass produced car to use this design. One of the most demanding compromises which has to be addressed with this type of design is the spread of the main frame rails. Positioning the frame rails far apart improves the rigidity of the frame but places some major limitations on the suspension. With the Healey I believe the spread of the frame rails was determined by the front suspension and that the rear was built around the result.

The problem with the under slung design is that the available suspension travel is limited by a factor of the distance from the underside of the rear axle to the ground. In the case of a Healey the total travel available is less than 12 cm.  Common practice in suspension design is to maintain the car’s normal ride height at or slightly above about mid travel. This means that the axle has only about 6 cm of available movement either up or down, and that is not very much. If you watch the suspension of a car driving next to you some time, you will see that an average car uses 10-15 cm of travel along a relatively smooth piece of highway.
The Healey design did produce a “firm” ride but, for cross ply tyres, which were all that was available in those days, the suspension was reasonably adequate.

HEALEY SUSPENSION IN THE 21ST CENTURY
Radial ply tyres became commonly available in the early 1960s and their improved grip means that they can generate forces in suspension systems that are substantially higher than could be generated with the bias or cross ply tyres. As a result, with good tyres and  some not very aggressive driving, the body roll of a Healey can be quite significant. Body roll in itself is not necessarily a bad thing, but it can have some negative effects when it causes excessive changes in camber of the wheels. i.e. their inclination relative to the ground.
However in the case of a Healey with its under slung frame, there is another major problem in that the body roll can be so significant that the rear frame on the inside of the turn rises sufficiently to contact the axle, which in turn lifts the inside tyre off the ground.

This has two immediate effects. Firstly the inside wheel spins because it cannot transfer the engine power to the ground and secondly the back of the car tends to step sideways. This sideways stepping is because tyres, particularly radial ply tyres in motion, behave a little oddly. Explained in simple terms, two tyres carrying 500 pounds each will have considerably greater resistance to side thrusts that one tyre carrying 250 pounds and the other carrying 750 pounds or in other words lift off one rear wheel and because the load on the rear tyres is suddenly transferred completely to the outside tyre things go very pear shaped indeed.

THE FIX
To rectify this situation we have several options.
1. We could fit stiffer springs. The problem is this would result in an even harsher ride, possibly okay for a smooth race track but definitely not ideal for street use.
2. We could increase the available space for rear axle travel. This is the solution that B.M.C. adopted in 1965, but it required some fairly extensive frame modifications which are out of the question for most people.
3. We could add roll stiffness to decrease the amount of body roll in turns and this is the course we will pursue here.

Roll stiffness can be easily increased by installing anti roll bars. The front of a Healey already has an anti roll bar and you can stiffen this a little by eliminating the softness of the bushes or considerably more by fitting a thicker bar. Increasing the front roll stiffness  results in the outside front wheel supporting more weight in the turn and the car staying more level however, as a result of the uneven tyre loading thing mentioned above, this change alone will produce massive understeer. Understeer, for those not familiar with the term, means you turn the steering wheel but the car to a greater or lesser degree carries on straight ahead.
To achieve the desired result roll stiffness has to be increased both front and rear, and then balanced between ends to keep the tyre weights where you want them through the turn. When this is done correctly the weight transfer in the turn will be evenly distributed between the front and rear wheels and this will produce the maximum grip.
SOME THINGS TO CONSIDER
1) Increasing roll stiffness will have a detrimental effect on the way the car negotiates one side bumps but a further modification; fitting tube shocks will improve this dramatically.
2) Installing most of the available rear anti roll bar kits involves welding to the frame.

(I have developed a design for a rear anti roll bar which requires only the drilling of 4 holes for installation but as yet I have not had an opportunity to test the design).

3) When it comes time to make adjustments remember; the stiffness of an anti roll bar increases as the fourth power of its diameter so a very slightly thicker bar will be substantially stiffer.

I hope that all helps.