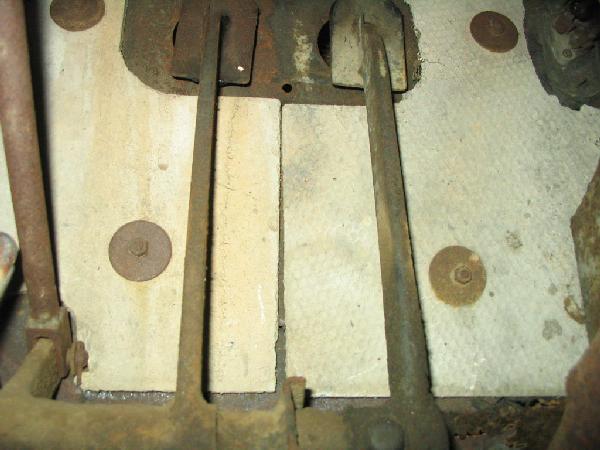 The drivers footwell heatshields on  #174 were original and somewhat different from those that I have seen on later cars.  These heat shields are installed on all “Big” Healeys to limit the amount of heat that is radiated onto the driver’s footwell from the exhaust manifold and down pipe.

The Original Heatshield on the Front of the Footwell

These heatshields are all made of the same asbestos material, with a pressed pattern on one side, that was used throughout later Healey production. Later 100s used a different material which is called “millboard”. Millboard is softer, a little more flexible and of layered construction. All 6 cylinder Healeys used the same material as was used on #174.

As is the case on Healeys that I have seen the material was not fitted with the pattern consistently inward, against the footwell, or outward.  In fact on #174 of the two panels fitted around the pedals one was “pattern in” and the other was “pattern out”.

The heatshields on later cars were much more carefully shaped so as to  cover the exposed areas of the footwell more completely.

Also of note, and peculiar to 100’s I believe, is the fact that no spacers were fitted between the material and the footwell to produce an air gap as was the case in the later cars.

#174, being a very early car, has some interesting differences in the types of fasteners used throughout the car. This was the period when many BSF threaded fasteners were still in use and quite a number of slot head screws.

As can be seen in the photographs taken before the heatshields were removed the fasteners were all installed with the nuts outward so the slotted “pan” heads of the screws were all under the carpet in the footwell.

Also of particular interest is the way that the panel around the clutch pedal and around the dip “dimmer” switch has been broken away, probably during assembly at Longbridge,  to provide adequate clearance.

I intend to reinstall these heatshields after painting them all over with latex paint to prevent their “shedding” asbestos fibers.