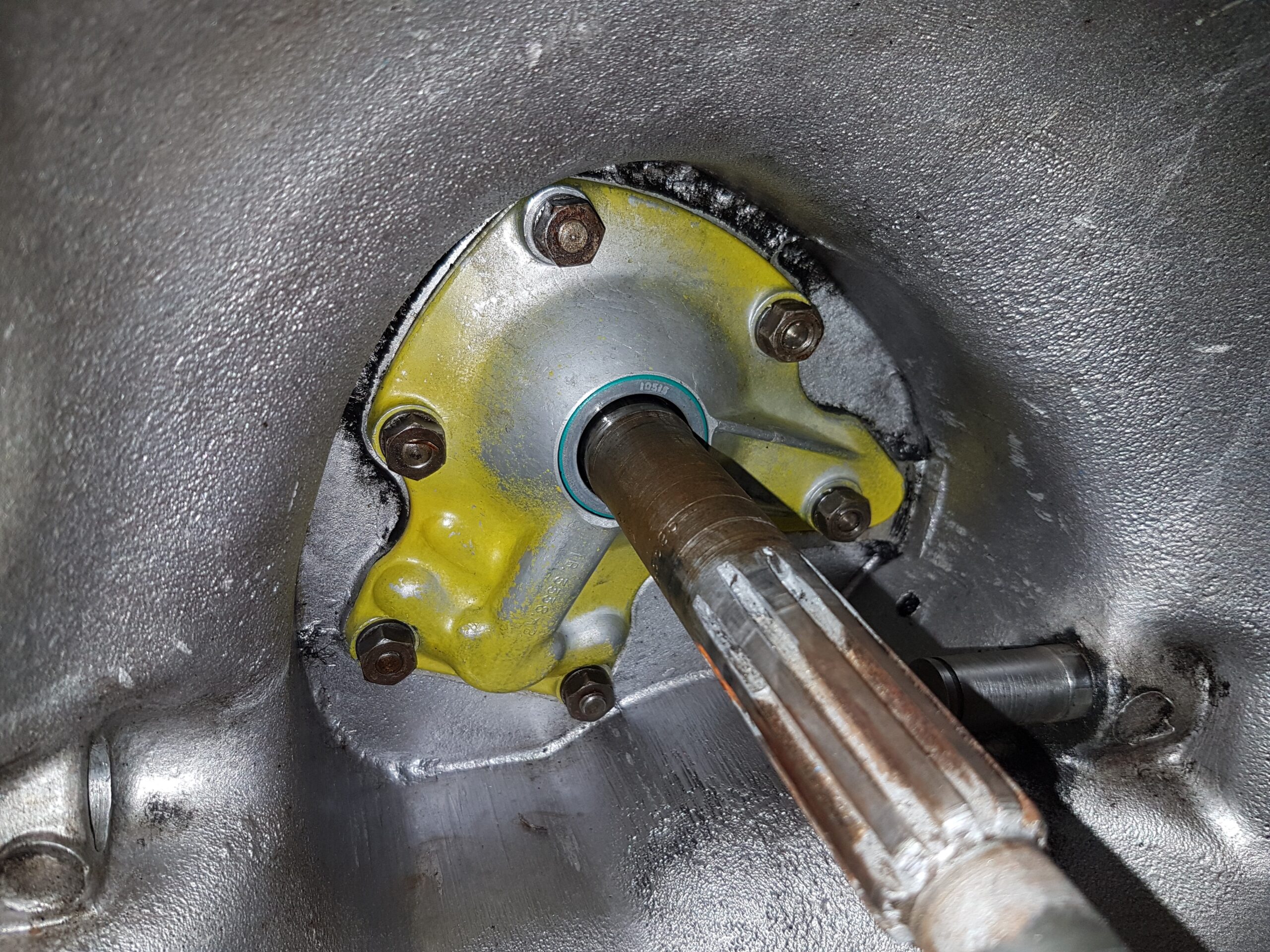 BN1 gearboxes are somewhat renowned for their ability to leave pools of oil on the ground.  One of the most annoying of these leaks occurs when the car is parked facing downhill. This particular leak is inherent in the design.

The BN1  Gearbox and Overdrive Unit

Rather than having a lip type seal this gearbox has a “scroll” seal between the input shaft and the housing. Scroll seals are actually a clearance seal in that there is a small gap between the shaft and the housing and, to prevent the oil from working its way through this gap, one surface, in this case that of the housing, has a thread cut into it which serves to “wind” the oil back into the gearbox.

Scroll seals actually work reasonably well in most situations but when the oil level in the case is higher than the seal and the shaft is not turning they don’t work at all!!!

The normal oil level in the BN1 gearbox is about 1 ½” below the bottom of the front shaft so as long as the car is parked on a relatively level surface all is well however, when the car is parked facing downhill, the oil level at the front of the box can rise sufficiently to submerge the area where the front shaft enters the box with the result that oil can easily leak through the scroll seal and either run down the input shaft and soak the clutch plate linings or just run out the bottom of the bellhousing.

When this gearbox was used in the vehicles for which it was originally designed it did not have an overdrive unit on the back of it. Adding the overdrive unit increased oil capacity and aggravated the “downhill facing” leakage issues.

I was asked to see if there was any way that I could correct this problem on the 100 that I’m presently restoring and after making some measurements determined that it was possible to modify the front seal housing of the gearbox to incorporate a lip seal.

The front housing is a die cast cover which integrates the scroll seal and locks the input front bearing in position.

The first job was to increase the inside diameter of the housing in the area where the scroll seal was originally located by 7/16”. To achieve this I had to figure out a way to center the hole in the face plate of my lathe. After experimenting with a dial gauge for way too long I decided to take a different approach.

I turned up an arbor that used the female #1 Morse taper of the headstock spindle as the center and extended forward at the inside diameter of the scroll seal.

With the housing centered using the arbor it was possible to mark out the centers for 3 holes in the faceplate which were then drilled and tapped with ¼” UNF threads which in turn accommodated hex head screws that were used to secure the housing to the faceplate.

3 Hex Head Screws Used to Secure Housing to the Faceplate

The Housing Accurately Machined to Size

The housing was carefully machined to the correct size for the seal and lightly faced off.

The Selected Seal was Carefully Inserted

The selected seal was then pressed into place using Locktite to ensure that it stayed in position.

Once the housing was reinstalled into the bellhousing the result looked just great.

I realize that this modification is probably beyond the abilities of the average home restoration so if anyone needs it done I would be happy to modify their gearbox’s front housing and install a seal using the setup I have built, just contact me. michaelsalter@gmail.com

Since writing this article I have managed to acquire a few “core” front housings and can now provide one from stock for $US85.00 exchange (plus shipping).