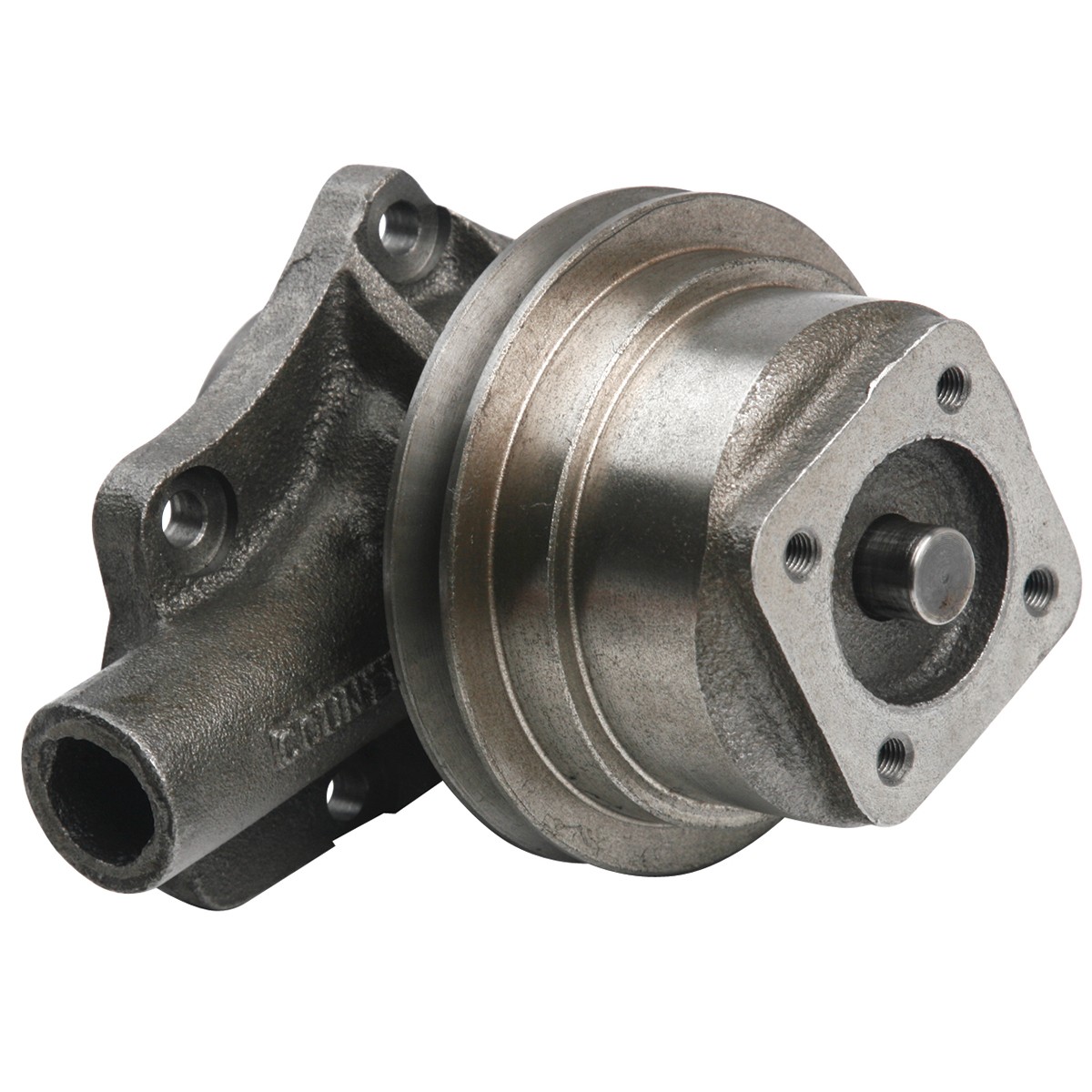 Several BJ7/8 owners, after reading my blog post on BJ8 water pump rebuilds, have asked me to rebuild water pumps for them. One of the perquisites for my tackling this is that the owner provides me with an original water pump as a core because these are becoming hard to find.

Unfortunately, several people, despite my asking that they ensure that the core they are returning is an original, have sent me reproduction pump cores which I do not rebuild. It seems that premature failure of the reproduction pumps is a frequent problem.

This article will explain why I don’t rebuild the repro pumps and explain the differences between them.

First to the EXTERNAL DIFFERENCES between the 2 pump types:

There basically are 2 types of original pumps. The first, used prior to BJ8 engine # 29K-H10271 used a pulley of the correct width for a 3/8” wide belt. All subsequent BJ8’s used a completely different pulley which was made for a ½” wide pulley.

Although there are different part numbers for the original pump housings, (AEC2019 & 12B2750 are two) they appear to be identical other than the provision of a threaded hole for lubricating the bearing, something that was not required when the “fully sealed cartridge” bearing type was adopted.

Similarly, there are different part numbers for original impellors but they appear to be identical.

These are a little harder to nail down as there has been more than one aftermarket manufacturer however, it seems that the only manufacturer currently producing pumps is County. In this article I will refer to these pumps as “reproduction”.

Reproduction pumps are available for both the 3/8” belt and the ½” belt however the pulleys of the two types look very similar to each other and neither of them look anything like the original ½” belt type illustrated above.

The reproduction pump housings have no part number on them but have the word “COUNTY” cast into the mounting flange.

The housings are very similar to the originals but have 4 additional and distinct differences.

2. Although this seems to be purely aesthetic, the small step in the upper edge of the casting is missing, something that can be easily seen when judging the car.

3. The small aperture in the bottom side of the bearing housing (hidden by the pulley on an assembled pump) which is used to insert the bearing locating wire on the originals, is missing.

Interestingly I have a couple of housings marked “MADE IN ENGLAND” the housing castings of which are essentially identical to those of the currently available pumps. I suspect that these were produced by an aftermarket company in the U.K. and the current reproductions are made from the same casting patterns.

One very obvious external difference between the original pumps and the reproduction units is the protrusion of the bearing shaft beyond both the pulley and impellor castings.

The reason for this is that the bearings used by the manufacturer of the reproduction pumps have substantially longer shafts. I have no idea why they have chosen to use the incorrect bearing when I have been able to readily source the original … perhaps cost is a factor here!!

Now to the INTERNAL DIFFERENCES:

The pumps seal used in the reproduction pumps is a completely different type from that used in the originals. Again, I have no idea why the incorrect seal has been used when I have been able to readily source the originals … perhaps cost is a factor here as well!

The original type of seal utilized a carbon face running against the cast iron impellor which I presume was quite adequate as I have heard of numerous instances of original pumps lasting many hundreds of thousands of miles and several decades.

The reproduction pumps use a much more complex seal which incorporates what appears to be a ceramic ring upon which the seal, apparently still carbon, runs. This type of seal requires considerably more space and this requirement is achieved by shortening the impellor. It is my assumption that this type of seal has become the norm in modern cars where higher rotational speeds and higher cooling system pressures have made the old carbon on cast iron type unsatisfactory.

WHY DO THESE REPRODUCTION PUMPS FAIL?

To be quite honest I really do not know why so many owners report premature failures in these reproduction pumps. I have had several sent to me (as cores) which I have carefully disassembled and been unable to positively identify the problem.

One recently received I put on my test rig before disassembly and determined that the pump leaked at anything over 2 p.s.i. but when I disassembled the pump, something that is very difficult to achieve without destroying the seal, I could see no indication of a fault with the seal! The bearing was like new, the sealing faces were perfect and the seal membrane was undamaged.

The only thing that has me wondering is the way the seal body is pressed into the housing. These modern seals have what appears to be a stainless-steel body (see above) and this body is pressed directly into the cast iron pump housing. On the pump I disassembled there was absolutely no evidence of any sort of sealant between the seal body and the pump housing and, in my opinion, there is a good likelihood of leakage at this point.

The original seals have a rubberized coating on the body which, when pressed into the cast iron housing, forms a very good seal.

I have cut open the cartridge bearing of both an original and reproduction pump and other than the shaft length, plastic ball retainers and slightly less substantial seals they appear to be identical.

I do not have the facilities to check the metallurgy of the shafts to determine if the frequently reported shaft breakage is perhaps related to that.

WHY I DON’T REBUILD REPRODUCTION PUMPS.

I do occasionally rebuild original pumps but there is no way that I can compete with the reproduction pumps insofar as price is concerned probably as a result of third world labour rates!!

Although the reproduction pump main housing and the pulley can be used for the earlier pumps the impellor cannot and, if an owner wants an aesthetically correct “concours” pump, even the main housing is unsatisfactory.

I have developed a scheme to modify the reproduction impellor to permit the pump to be rebuilt with an original seal but it is very labour intensive, makes the rebuilt pump even more expensive and results in less of the impellor engaging on the shaft when original type bearings are used.