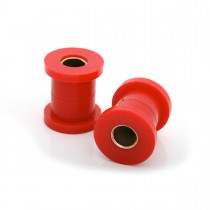 For many years now aftermarket vendors have been extolling the virtues of polyurethane suspension bushes. I have yet to be convinced. Several years back, at the request of a Healey owner we installed a set of these which he supplied. They came from a reputable supplier and were touted to be the best thing since sliced bread. Unfortunately I don’t have a photo of the bushes he supplied but they were red and looked to be of good quality.

I’m always hesitant to install customer supplied parts because if something goes wrong there is always some concern as to who is responsible for the problem and who will pay for the necessary corrective action.

After making my position clear I got the go ahead and installed these front suspension bushes in said Healey. Anyone who has worked on a Healey which has spent time in Eastern Canada is well aware of the difficulties that removing the lower inner suspension bushes can present and this car was no exception. As I recall this one was so bad that I ended up having to change all four pivot pins and washers after having to resort to using the great blue wrench to get out the original rubber bushes which, before my attack, were in great shape despite their age.

Polyurethane bushes replaced the anti roll bar bearings, the anti roll bar link bushes (which required that the links be replaced because the ends of the threads were badly damaged) the upper trunnion bushes and the afore mentioned inner lower bushes. No lubricant was supplied with this set but as per the instructions we applied silicone grease to the bushes.

In less that one week the owner was back complaining of creaking noises from the front suspension; however, despite the creaking noises, he swore that the handling of the car had improved immeasurably.

I took it all apart and re-applied the lubricant and reassembled everything. This fix lasted about 10 days before the creaking started up again and one of the threads broke off one of the new anti roll bar links. The car was back and I was on vacation. My chief mechanic of the era was a distinctly crusty individual who was somewhat disinclined to “humour” customers and, without discussing the options with the owner, fixed the problem and sent him on his way.

When I ran into him at the next club gathering the owner was to be heard extolling the virtues of the “genius” I had working in the shop while I was on vacation and how he, the mechanic, had managed to correct the creaking problem in his suspension. He took pains to point out that this was something that I wasn’t able to do, and how wonderful the handling was with the polyurethane bushes. When back at work on the following Monday I mentioned the praise to mechanic he said “Wait till he finds out that the bushes are rubber”.

I think this incident says a lot about polyurethane bushes in Healeys and MGs for that matter.

The problem with these bushes, as I see it, is that joints are not designed for polyurethane bushes and without a major reconfiguration are completely inappropriate for them.

Take for example the upper trunnion of a Healey or, for that matter an MGB which is virtually identical. The same issues apply to the lower inner joints. This is what a cross section of the joint looks like.

The brilliance of the design is that there is no relative movement between the surfaces. All the movement is taken up by the compliance of the rubber bush. No movement means no maintenance, no squeaks and no wear. What more could you ask for? The bush design is far cleverer than it at first appears. When the joint is tightened up with the suspension in mid range there is just enough rubber in there that it remains within its elastic limit throughout the entire movement of the joint and the rubber is squeezed in so tightly that it keeps moisture out. It’s brilliant!!

Now let’s consider the concept of installing polyurethane bushes into the same place. This is a scan of the instructions received with a set of such bushings.

And this is what the “improved” joint looks like.

The first problem is that there is no sealing medium at the edge of the sliding joint at the shock arm with the result that any lubricant in there gets squeezed out and replaced by moisture.

The next problem is that the force required to hold the bushes into the tapered holes, which is a factor of the compressibility of the urethane, the excessive length of the urethane which gets compressed to tighten the bush into the cavity and the length of the sleeve is quite substantial. This force produces friction at the shock arm to urethane intersection. Decrease this force and the bushes will start rotating inside the upper trunnion because they are a loose fit.

Way back in 1962 Triumph redesigned the suspension used in their TR series of sportscars and used nylon bushes in the then new TR4A. Around the same time they also launched the Spitfire which used a similar system also incorporating nylon bushes. I know that nylon isn’t exactly the same as polyurethane, but it does have very similar properties. The joints in these cars were redesigned to incorporate the nylon and this redesign included fitting a complex “O” ring sealing system to keep moisture out and lubricant in. They worked fairly well, although they do wear out frequently and are often reassembled incorrectly during maintenance which does not improve matters.

I have no doubt the polyurethane is a wonderful material for suspension joints BUT the joint must be designed appropriately and not cobbled up from something designed to operate entirely differently. 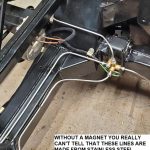 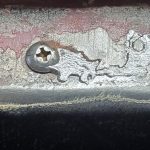 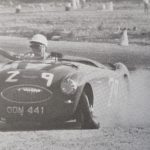 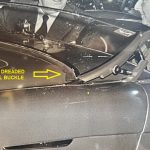