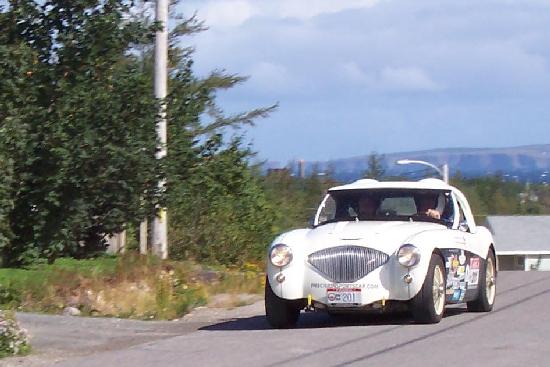 The change to stronger wheels is detailed in the above Service Journal.

When I checked the run out of my wheels I found that they were as much as 0.100″ out of round ….no wonder I had scuttle shake.

Having been unable to find anyone offering the service locally I looked into the idea of shipping my wheels and tires off to PA or NC to have them shaved and trued but the cost of doing that from Canada was more than the wheels were worth!!!

I got to thinking about how might I develop a home remedy for this problem and thought that I could probably achieve the same result with the equipment I have and a little “Kiwi Ingenuity”.

B. T W. I AM NOT RECOMMENDING THAT ANYONE ATTEMPT THIS AT HOME!!!

Here’s what I did  …   fortunately we don’t get a lot of OSHA inspections around here.

I have a newly sharpened 60 tooth carbide ripping blade in the saw and you will notice a short length of 2″ x 2″ lumber behind the tire that is forming a rigid strut between the saw bench and the rear axle housing. To avoid damaging the blade I had to be sure to dig all the little stones out of the tread before starting.

Four cuts were required to shave the entire surface of each tire and during each cut the blade was gradually raised, using the blade height adjustment of the table saw, until it was apparent that the blade was contacting the tire throughout its full rotation. The blade was positioned ahead of the wheel center with the wheel rotating in reverse to prevent the possibility of the blade “digging in”. This particular car has a limited slip differential so both wheels rotate in the same direction when they are in the air. Without a limited slip diff it would probably be necessary to lock the brake on the other rear wheel.

After the cutting was finished the surface of the tire tread was a little fuzzy but that loose rubber wore off entirely within a few miles of driving.

The end result was a total transformation. At 60 MPH, the speed where it was previously most pronounced, the car has no scuttle shake at all and that is on a set of wheels that have never been balanced!!!

AGAIN I EMPHASIZE THAT THIS IS NOT AN APPROVED PRACTICE AND IT SHOULD NOT BE ATTEMPTED BEFORE ALL ASSOCIATED RISKS ARE CAREFULLY CONSIDERED. PROCEED AT YOUR OWN RISK!!!