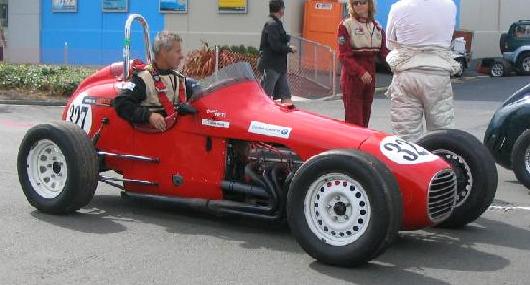 Judy and I are up in N’Zed ( Kiwis believe that south should be on the top of the globe) for our annual winter get away. While I’m here I’m managing to take in a couple of events of the Southern Festival of Speed which has been held here for the last few years.

The first of these events that I managed to get to last weekend was the one at Teretonga in the very south of the country “up” near Invercargill. Teretonga, although flat, is a fantastic track has lots of run off areas and some very challenging turns. It was first built in the late 50s and has been the scene of some great racing. It is here that I first saw Jim Clark race and I remember standing on the inside of the corner before the main straight with my Dad who pointed out to me how incredibly consistent this flying Scotsman was when lap after lap his inside front wheel passed within 2 -3 inches of a white mark on the track surface. His passing was a great loss to the racing world.

The event at Teretonga was part of the club’s 50th anniversary celebrations and one of the special attractions of the event was the gathering of many of the cars built by a local genius by the name of George Begg. Between 1964 and 1974 George, who also wrote the book upon which “The World’s Fastest Indian” was based, built 18 race cars in his Drummond “toy shop” and all but 2 of these were on display this weekend. The first car was a 650c.c. single seater powered by a BSA motorcycle engine

and he worked up to building some fearsome Formula 5000 cars of the early 70s.

For me the most memorable was one called the “Daimler Begg”. In its day this car was very successful in New Zealand but the most amazing thing is that it was powered by a Daimler V8. Why a Daimler? Well V8 engines were not that easy to come by those days in New Zealand and George was quick to recognize the potential of the engine used by the venerable old English Daimler company to power its version of the Jaguar MkII sedan and the fibreglass SP250. The engine itself was a very interesting design by Edward Turner the designer of many British motorcycle engines including the Triumph 650 the combustion chamber of which bears a remarkable resemblance to that of the 2500c.c. Daimler V8. When I last saw the car the engine was dominated by 4 enormous Weber IDA carburettors and its performance was nothing short of awesome. The current owner Brian Grant has replaced the Webers with a Holley 4 barrel which is a bit of a shame because the originals with their long chrome intake trumpets gave the car a very professional look.

A small collection of other examples of Kiwi Ingenuity was present and here are some pics.

That’s a Jaguar Engine in There!!