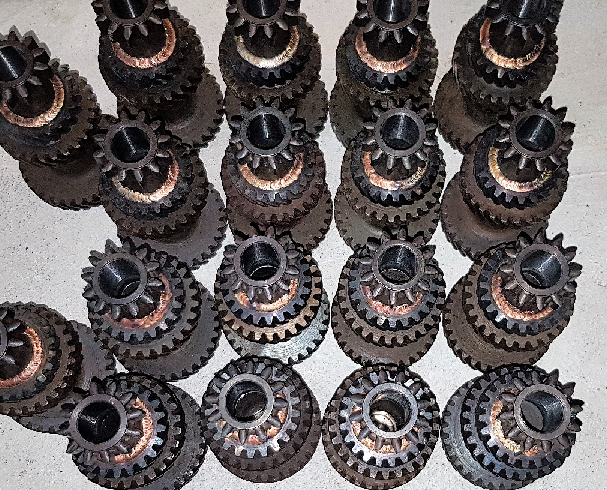 In the early days of the last century one of the major considerations in British motor engineering design was to manufacture at MINIMUM COST and this principle was evident in almost everything that they produced.

One area where this was most notable was in the design of the 4 speed gearboxes fitted to almost every British car. In order to avoid the necessity of adding an extra set of gear teeth to the cluster gear (laygear) with the attendant requirements of additional overall length, extra gear cutting etc., etc. they universally selected not to make the 1st gear a “constant mesh” type but opted instead to use a straight cut (spur) gear so that that gear could also be used as part of the reverse gear train. The inevitable result was the dreaded “non-syncro” 1st gear.

I have a Drivers Handbook for a Sunbeam Rapier MkII within which the writers refer to what is actually 1st gear as “emergency low gear”.

“The use of emergency low gear is recommended when starting on a hill or when the car is fully loaded. It is also desirable, during the running in period, to make full use of all four gears, to ensure that all new parts in the gearbox become bedded in as the process of running in proceeds. Thereafter, low gear may be used for moving off on level ground.

My bet is that when an owner showed up with a ruined gearbox during the warranty period the service manager could confidently point out this paragraph to deny coverage.

As a consequence of this economizing measure the vast majority of these early 4 speed gearboxes failed prematurely as a result of drivers “grinding” them into 1st gear while the car was still moving. When this was done the little chips of hardened steel knocked off the 1st and cluster gears eventually made their way into the roller bearings in the gearbox and destroyed the bearings and the shafts that they ran on.

The “sports car” gearboxes seemed to be more vulnerable to this than the more sedately driven family cars, probably as a consequence of the way they were driven, and this resulted in many premature gearbox failures.

While new replacement parts were available repairing this damage was a fairly straightforward gearbox rebuild but, when the supplies of new gears ran out, this became a serious problem as setting up to manufacture new gears, and in particular new cluster gears, was a very expensive process.

Fortunately some years ago a brilliant and unnamed individual came with the idea of just replacing the 1st gear on the cluster gear and we started purchasing these and installing them in customer’s gearboxes in the ‘90’s.

Of course there is always someone around who can produce a less expensive and lower quality part and after a few years we started to encounter problems with the new gears on the rebuilt cluster gears wearing prematurely.

Testing revealed that the replacement gears that had been failing prematurely were substantially softer than the other gears on the cluster or the original 1st gears so, after some research, we have developed a process that produces a re-manufactured cluster gear of superior quality using modern materials and a high speed welding process that avoids overheating the gear next to the weld.

I can now offer a limited number of these re-manufactured MG TD, TD MkII, TF and TF 1500 for  gears for sale:

We must receive your core before shipping. Clusters with damage on teeth other than the 1st/reverse gear are not acceptable.

Prices include shipping to  the US lower 48 or Canada.