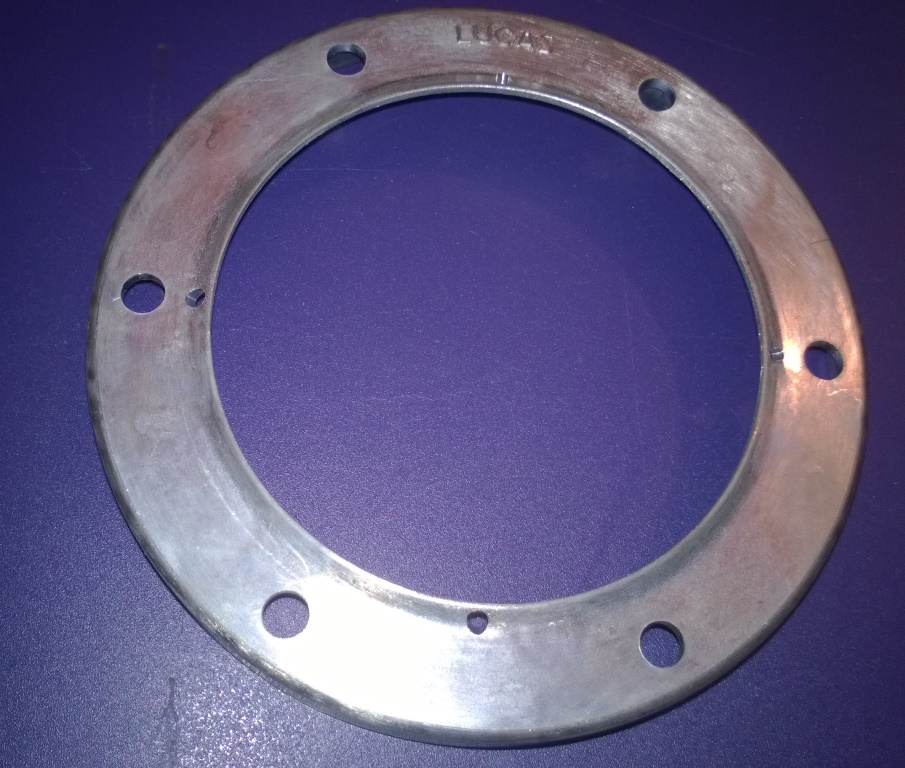 At last after months of back and forth with various die makers and die casters I have received a shipment of horn rims for the Lucas HF1748 horns.

This whole process was initiated by my being unable to find a pair of the original, zinc die cast, rims for the horns on my 1953 Austin Healey 100.

Because the horns are mounted low down under the radiator they are very vulnerable to damage and corrosion. The first and often only part to break is the rim which is secured by six steel ¼” B.S.F. cheese head screws. Galvanic corrosion of the rim produces zinc oxide which swells and causes the rim to crack. The ones on #174 each came off in completely unusable condition.

As the last of these horns were fitted to cars over 50 years ago spare parts are very hard to find. After trolling the internet for over 2 years I was only able to find one already cracked rim so I started investigating methods by which the rim could be reproduced

The work required to produce these accurate reproductions has given me a new respect for anyone who undertakes small batch production of any cast component, that said however I still don’t have much time for companies who make “close approximations” when, with a little more effort and time, they could produce parts which are indistinguishable from the originals.

The first idea that I investigated was 3D printing. Because I don’t have access to a 3D scanner the first step in that process was to produce a CAD drawing of the rim. Fortunately I have a very good friend with vast CAD drawing experience who was kind enough to work on this for me. Everything went swimmingly until the time came to find the correct font for the “LUCAS” lettering as was on the original rims.

I had no idea that there were so many fonts in the world and we were unable to find one which had the straight side on the “U” and an “S” that looks like a mirror image “Z” as the lettering was on the original. The only solution was to painstakingly draw each letter and individually position them on the curve of the rim, a very time consuming process.

Finally the drawings were done and sent off for 3D printing in nylon.

Although the plastic rims produced by 3D printing were pretty good they required quite a bit of post-production work which included filling the surface indentations with spot putty followed by careful sanding and painting to produce a reasonably acceptable part. The biggest problem however was the cost of the 3D printing process which is, after all, intended for making prototype parts.

I was not satisfied that this process would ever be practical for making even a small batch of accurate rims at a reasonable price so started looking for a more viable alternative.

Given the difficulty that I had encountered in finding replacement rims I decided that it may be possible to have a set of steel cavity molds made and produce the parts using the “Cold Chamber Die Casting” method.

Die casting of high volume parts is very economical but the initial outlay to produce the die is substantial. I figured that if I could sell 100 rims that could cover the cost of the die and the manufacturing of the rims. The die maker was very helpful and by modifying a die used previously and fitting my work in between other jobs he managed to produce a very accurate die within my budget and the casting process started.

The quality of the finished parts was absolutely astounding and the rims can be installed without any hand finishing at all.

I decided to send one to Roger Moment, the world renowned Austin Healey expert, and his comments were as follows:

“I have been able to inspect one and it is truly accurate.  The only variation I can find is that on the back side of the ring there are 5 marks where the vents and fill sprue on the mold were located.  These marks are all flush or slightly recessed so they won’t affect the mounting and are totally hidden.  …The cast metal surface is totally smooth, as-original.”

My efforts and investment were all worth it but it is a very complicated and expensive way to get a pair of horn rims. I certainly won’t be casting any more in the foreseeable future.

If you require accurate replacement rims for your Lucas horns please don’t hesitate to contact me.

They cost $US109 ea. which includes N.A. shipping.  SOLD OUT

A NOTE REGARDING PARTS FOR THESE LUCAS ALTO HORNS.

1. The original tone disc was made from magnesium allow, not aluminium!! If you are buying these on line be sure to check that magnesium is being supplied … ALUMINUIM JUST DOESN’T SOUND RIGHT (Lucas used magnesium for a reason).

2. The original mounting bracket plates were made from SPRING STEEL … mild steel plates will break. If you are buying these on line be sure to check that they are spring steel.