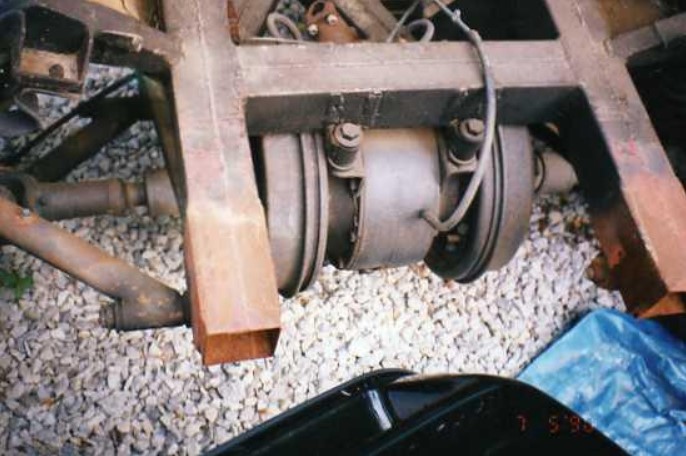 I was going through a pile of old photos a few days ago and came across a picture that someone gave me about 15 or 20 years back.

I apologize to the person who took the time to bring it to me, but I do not remember who it was. I do recall that the donor was someone from the Southern Ontario Austin Healey Club and that he had brought the photo to me specifically to ask if I had ever seen a Healey model with this rear suspension system fitted to it. I also recall that this was all rather secretive in that the person involved had apparently found this Healey in a partially finished state with this suspension.

1) Careful examination of the top area of the photo confirms that this is almost certainly a Healey as the standard cross brace section of a Healey’s frame is visible.
2) The frame sections are made from what appear to be sections of Healey frames. If someone other than the factory was going to do this to a car it would seem unlikely that they would have had access to sections of Healey frames or have bothered to replicate them.
3) It has inboard drum brakes indicating that this project was probably undertaken before inboard disc brakes were more common.
4) The suspension arms are very unusual yet quite clever in that the wheel would experience no camber change throughout its entire range of movement. This would not perhaps be ideal because some camber change upon compression is desirable to counteract the effects of body roll but with a little tweaking this could probably be built in.
5) I don’t recognize the differential unit but do note that it has a U bolt style universal joint yoke on the drive shaft connection. I think these are more typical on American style drive shafts.

If the person who gave me this picture is out there and on the list I’m sure we would all like to hear more about it or perhaps if anyone has any knowledge of a factory project of this type.