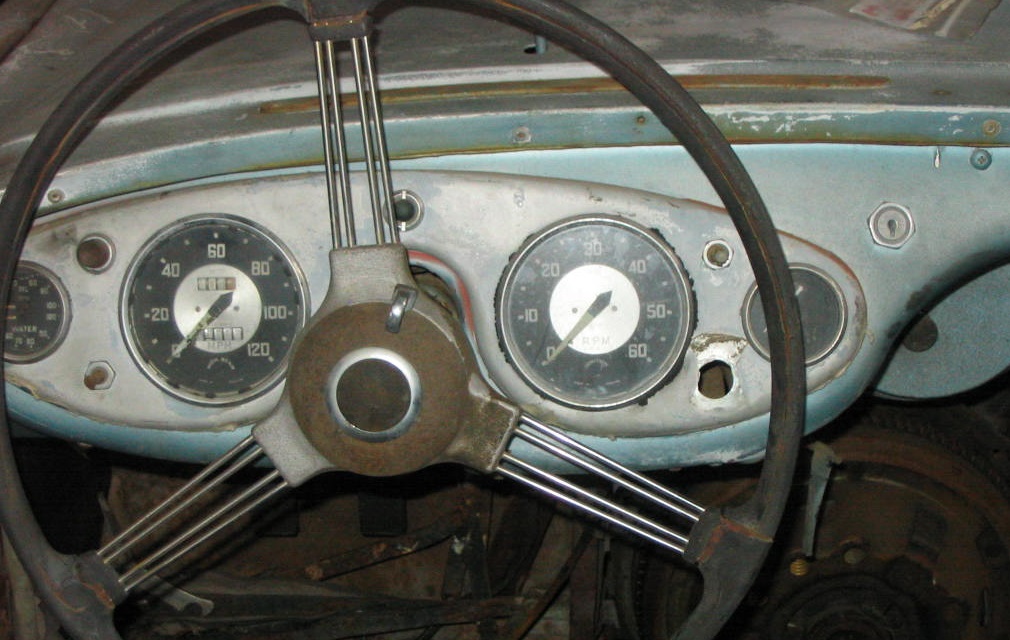 In my continuing efforts to accurately archive as many details of this very early Austin Healey 100  as I can I have spent time gently sanding through the paint on the dash in an attempt to determine its original colour.

I want to emphasize that all I am doing here is cataloging what I’m finding as I disassemble this particular car and I am in no way suggesting that  this information will be accurate for other Austin Healey 100s of this era.

The dash consists of 2 aluminium pressings. One I call the Dash and the other, which is attached to the Dash I call the Instrument Pod.

The Instrument Pod is mounted onto the surface of the Dash and attached using screws inserted from the rear.

Here are some background points:

1. The back of the Dash is a dark brown with some small areas at  the ends having been over sprayed with black (The reverse of the front of  the Dash oddly. More about that here ).

2. The Dash has been apart. i.e. the Instrument Pod has at some time  been separated from the Dash and the rubber strip which is meant to act as a seal between them is missing. (I’m  absolutely confident that the safety gauge has never been removed from the  car and pretty sure that the  Dash itself has never been removed from the car. Because the safety gauge has a liquid filled capillary tube running from it to the radiator the Instrument Pod almost certainly has never been moved more than a few inches from its installed position).

3. As every part of the front of the Dash has  black primer which  has been sprayed over with a brown paint (primer?) which is consistent with the rest of the paint on the inner body,  I think it is fairly safe to conclude that the Dash has never been stripped to bare metal. (The outer surfaces of the body have been stripped bare and on them light grey primer has  been used).

4. The last paint applied to the Dash was a silver/blue colour which was very poorly done in that there is no paint up over the top of the Dash where it is hidden from view by the rear lip of the front shroud.

Close up of of the paint layers on the Dash.

The next image is from the area of the Dash at the top of  where the Instrument Pod is installed.

Paint layers at the Dash to Instrument Pod transition area.

Of particular note is the gloss black which was the top surface of the  Dash under the Instrument Pod.

When Peter Svilans and I first looked at that black we thought it may be a dark blue, but we have concluded that it is definitely black.

Paint layers on the Instrument Pod

The grey on the instrument pod  (1st coat on top of the medium brown primer) is very similar, if not identical to the blue/grey (Healey Grey?) that I have concluded was the original colour of this car.

Although most of the original interior was missing from the car some remnants remained and they appear to confirm that the interior was trimmed in dark blue.

This one really has me scratching my head as the conclusions that I have come to are completely out of line with what is “accepted” as the usual.

Anyone who hasn’t fallen asleep so far and would care to comment your thoughts are very welcome. Please comment using the button at the top of this post.

I’m particularly interested if anyone can suggest a sequence of painting events which may have created this combination of colour coats.