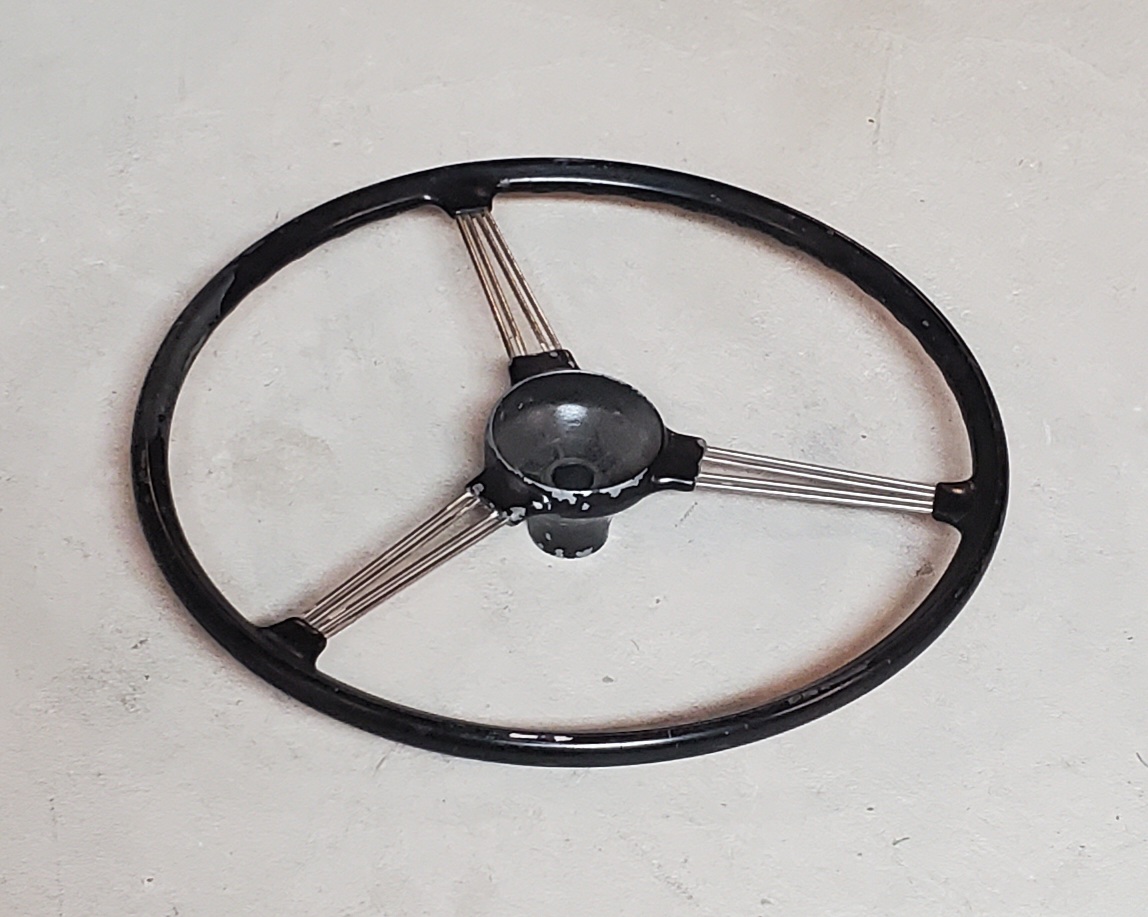 When I was a little nipper back in Dunedin, New Zealand our family car, the first I remember anyway, was a 1948 Austin 16.

I have 4 siblings so journeys in the Austin with 3 in the front and 4 in the back were cozy affairs.

There was always a race for which of the kids got to ride up front between Mum and Dad, whom of course always drove. As a result I spent many hours at pretty close quarters with the dash and controls of that Austin and many of the details are etched indelibly in my memory. I remember the combined ignition and lighting switch with the little window within which the words “OFF”, “SIDE” and “HEAD” showed and I remember the cream coloured instruments with the brown centers.

Among my recollections, for some reason is the finish on the hub of the “banjo” style steering wheel. It was “wrinkle” paint with the same texture as my Dad’s Philco radio which was “wrinkle” brown. It is amazing the details that one remembers so clearly from one’s childhood.

The memory of the hub of that steering wheel immediately sprang to mind when I studied the original steering wheel for the 1953 Austin Healey body #174 that I have just finished restoring but first a little background.

The first 1000 Austin Healeys did not have the luxury of seat slides. If you needed to adjust the distance between the seat and the pedals a half inch wrench was used to unbolt the seat and move it to another of the 5 pairs of holes provided in the seat base.

Not really convenient but I presume that the tooling required to produce compact seat slides had not been produced at that time, so compromises were required.

Additionally those first 1000 cars had a steering wheel which, after loosening a locking nut, could be moved forward or backward on the steering column. This feature was dropped for the later 100s when seat slides were eventually fitted but reintroduced, as an option, on the six cylinder cars.

The adjustable wheel on the early 100s used a hub with locking nut which had the manufacturer’s name “BLUEMEL’S” stamped on it. Interestingly the profile of the early hub was considerably different from that used on the 6 cylinder adjustable steering wheels.

But the really interesting thing is the finish on this early hub which was, I believe, black wrinkle paint just like the wheel on my Dad’s Austin 16.

As can be seen in the picture below the finishing material on the early 100 hub is is only microns thick and crumbles into dust when peeled off. It is like normal paint in this respect.

The material used on the later six cylinder adjustable steering wheels is not paint, is very similar to powder coat being about 0.025” thick and it can only be peeled off in larger pieces.

The other interesting difference between these finishes is what happens to them when they are polished. The later hub coating easily polishes up to a deep gloss black surface.

The material on the early wheel appears to be pock marked and rough with pitting on the surface and will not polish to a glossy surface.

Unfortunately most of these early 100s have be restored over the last 60 years and it is very difficult to confirm for sure that they had this unique “wrinkle” finish on the steering wheel hub but there is no question that the material used to finish the hub was very different from that used on the later cars and it was also different from plain gloss black paint.

I have decided therefore that, in light of a lack of evidence to the contrary, it is most likely that in addition to being used on the heater housing and air filters black wrinkle paint was the finish applied to these steering wheel hubs and that is what I have used in the restoration of #174. PLEASE READ MY NOTE AT THE END OF THIS POST.

I think it looks great and very much “period correct”.

Since writing this post I have been lucky enough to acquire another early BN1 steering wheel and examine several others. I am now convinced that my initial conclusion that the hubs of these wheels were finished with “wrinkle” paint was incorrect. Although the thick powder coating type finish as used on the later Healey steering wheel hubs was not used on these earlier hubs I no longer believe that “wrinkle” paint was used either. I am now confident that the original finish was a gloss black paint.