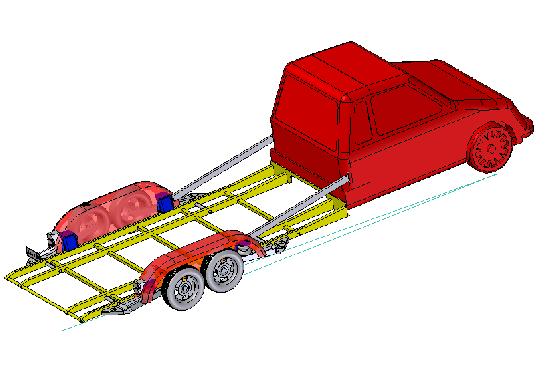 Well it is now 8 years since I built the CARCAMEL and it has proved to be a very versatile and reliable machine far exceeding my expectations of a “homebuilt” vehicle.

It has been used for carrying all manner of things.

SOME DIFFICULT TO LOAD AND UNLOAD BY MYSELF

SOME THAT WOULD OTHERWISE REQUIRE A LARGE TRUCK

Since the conversion I have driven the CARCAMEL over 200,000 km .

That old Dodge 3.3 liter V6 still runs strong and doesn’t burn any oil, it hasn’t been touched since it was built in 1994.

As expected some things have caused problems but all have been satisfactorily resolved. The following are the ones I remember
CV SHAFTS

The CV shafts of the van both failed within the first 100,000 km. I originally thought that the modifications to the vehicle may have been a contributing factor but the real problem proved to be poor quality replacement parts. It wasn’t until I took the failed shafts to a rebuilder in person that I found out aftermarket replacement shafts had been installed before I got the van and their poor quality was the cause of the problems.
The rebuilder pointed out that the heat treating of the aftermarket shafts was totally inadequate and sold me a pair of remanufactured originals which have been in ever since with no problems what so ever.

Originally I installed some valves that I found on eBay which were intended for industrial machines. Unfortunately they didn’t much like this application and became a bit unreliable.

I purchased the above as replacements from Princess Auto and moved them into boxes mounted between the rear wheels which completely resolved the problems.

The original EFI fuel pump failed at about 225,000km. When I pulled the tank to replace it I found that the top of the tank was badly rusted so I installed a new replacement and a new pump. Unfortunately the fuel tank is the lowest part of the vehicle so it is inclined to take a bit of a beating if I forget to raise the rear suspension when passing over high crests. So far that hasn’t created any serious problems but in a MK II version I would try to prevent the tank hanging so low.

Originally I used the suspension compressor from an Oldsmobile 88 to provide the pressure for the rear air spring suspension. This proved to be of too small a capacity so I have now installed one used to level motor homes which, although just adequate has proved to be reliable.

This one took a while to solve. Every time I drove for a prolonged period in rain the rear wheel bearings would get noisy a few weeks afterward. When I pulled them apart the bearings were rusty and damaged as a result of having water get into them. The rear stub axles were from 94 era Dodge Caravans but the 4 bolt hubs (required to allow me to use 13″ wheels with the correct offset) were from the very first model 1983. After some judicious measuring I determined that the later stub axles were 1/4″ longer and the hub seal was not running on its seal face. Some little spacers, machined up on my lathe, solved that one.

Another one that I struggled with for a while. Eventually solved by changing the cruise module.

Most or these problems are to be expected in a 19 year old 380,000 km vehicle and none have been close to being show stoppers.

I don’t drive the CARCAMEL in winter because salt damage would finish it off very quickly.

This vehicle has saved my friends, my relatives and myself thousands of dollars in transportation costs and allowed us to easily and conveniently transport goods and vehicles for large distances very safely.

My buddy bought a new Dodge Caravan in 2011, when it is time for him to replace it we are going to “abbreviate” it the same way we did the ’94 and the rear deck will have a new life and the CARCAMEL will live on.