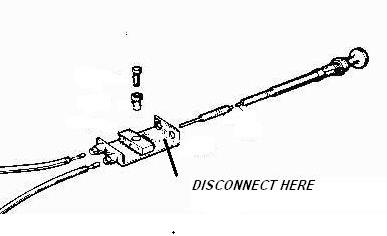 One of the problems I had with my MkIII (BJ8) was that the choke control kept coming loose in the dash. BJ8’s came through the shop on a fairly regular basis and at least half of those would arrive with the same problem. This fault did nothing to enhance the driver’s ability to adjust the engine’s fuel mixture requirements when the engine was cold and when they are correctly tuned BJ8s need a good choke to get them started in cold weather. Unfortunately this is not a repair to which the Workshop Manual devotes much space.

The choke control features a friction lock, the idea of which is that when a satisfactory setting is achieved the choke control can be held in position by merely rotating the handle a little to lock it. The locking mechanism, although very simple, is quite ingenious.
The choke control shaft has a groove along its length. The choke body has an axial hole up near the dashboard end and inside this hole resides a ball bearing. Over the outside of the hole and pressing the ball against the shaft of the control is a spring steel ring. The parts can be seen in this exploded view.

If the choke control is rotated relative to the body in either direction the ball rides out of the groove and is forced to move up the axial hole against the pressure of the spring ring.  This pressure creates friction between the shaft of the choke control and the body which locks the choke in position. Turn the control back so that the ball drops into the groove and the lock is released.
This is what the whole thing looks like when assembled.

Pretty tricky but, when used in a BJ8, there is a problem.
A nut and washer fit onto the thread on the body to secure the choke body into the veneered plywood dash. The plywood is clamped between the nut and the flange on the choke body. This arrangement works fine when first assembled but after a few of these knob rotating operations the nut has a tendency to work loose. When the body is not firmly secured into the dash it rotates readily in the dash rather than the control shaft rotating within the choke body and it becomes impossible to lock the choke.
Just to make the correction of this situation a little more difficult the back side of the dash is counterbored, probably so that a standard choke control could be used rather than having one with a longer body especially developed. This counterbore makes it impossible to fit a normal box spanner (wrench) onto the nut to rectify the aforementioned looseness. THIS IS QUICKLY BECOMING A VERY FRUSTRATING EXERCISE.
The only way I have been able to correct the problem is to start by disconnecting the choke cable from the splitter on the bulkhead.

Then I thread 5/8” spark plug socket over the cable and up to the dash where, using a spanner on the hex on the top of the plug socket, I can tighten the nut on the choke control again. To prevent the control coming loose again I then fit a 5/8” UNC Palnut.

Alan has commented that his original BJ8 choke control was of this type which has a round knob with picture somewhat like a fan on it:

I was of the opinion that this is a later version of the locking choke mechanism but could be wrong. The one pictured is from of my 1970 UK Market MGBGT. The original BJ8 choke knob was round and fairly flat with a white circle close to the outside edge and the word “CHOKE” across the center.

A couple of point that I have remembered about this operation which may be of help to anyone working on the choke control of their BJ8.

1. When the handle is pulled completely out of the body the inside of the body will acceptan Allen key which is of great help when tightening things up.

2. It is a lot easier to work on the choke control whith the tachometer removed.