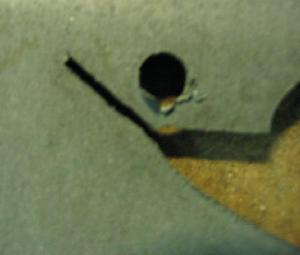 Now that I have had the body panels for this car chemically cleaned I am able to see some details on the front fenders which are rather unusual and not evident on later versions.

First is the strange way that the vent holes have been manufactured (that’s if you do actually  “manufacture” a hole).

This is how they looked before cleaning.

The first thing that is odd are the little cuts at either end of the vent hole. This is what one looks like close up from the inside.

My first thought was that there had been cracks at the ends of the cutouts and someone had run a small saw down the crack and “stop drilled”  it but that just does not make sense.

It is almost as though the holes were cut out using a primitive water jet system….but in 1953!!! And, if they were using some sort of cutting tool,  it looks as though they started at a drilled hole and then moved in to the area to be cut….why not start inside the line?

Anyone got any idea of the tooling or technique used to make these cutouts?

The other oddity is the construction of the fenders themselves.  Each has been made from 3 separate pressings.

There is a weld running vertically at the top of the wheel well.

and another, also running radially near the bottom of the headlight.

These welds are some of the finest production ‘”butt hammer welds I have ever seen!!

I surmise that the manufacturers were still developing their manufacturing techniques and, although rather labour intensive, this is one system that they considered using.

Anyone else come across BN1 fenders made this way?

Since the original posting of this article we have had the opportunity to study these fenders in more detail and found yet another interesting feature.

Unlike all other Healey fenders that I have ever seen the very bottom of the fender where the metal is bent in to meet up with the inner sill these fenders have a separate piece of metal. This metal is attached with a spot welded lap joint…a real rust trap!!

Although the bottom of the right front fender was rusted and and badly repaired the original lap joint was still evident.

The photo below shows a detail of the rear of the lap joint as viewed from the inside.

The next interesting item is a part of a photograph that I received of Healey 100 #384.

You have to look closely but it has the same odd cuts that #174 has at the ends of the vent cutouts!!

And, while we are on the subject of fenders, this photo is of the dog leg area of the right rear fender from #174.

The left fender’s dog leg area is exactly the same shape as the template.. The right must have been a Friday Fender.