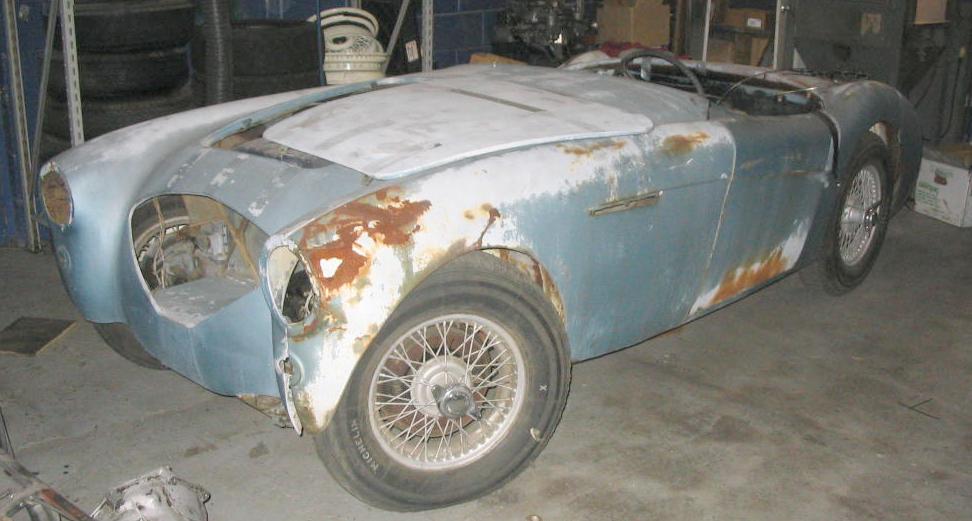 When I received the Heritage Certificate for this car I was surprised to note that the original colour was noted as “Healey Grey”.  I have not been a close follower of all the work that people have done on these very interesting “early” cars so was not aware of the discussion that had gone on among those “in the know ” about this colour.

When I broached the subject with one expert whose opinions I respect greatly, he was pretty sure that the reason that the name “Healey Grey” has been listed on Heritage Certificates is the source of information for those certificates. He gave the following as the reasoning:

1. I have record in the Hundred Registry of quite a few early cars logged as being painted in “Healey Grey”, and others in “ Healey Blue”. They seem to have used the two terms back and forth to mean the same thing, though some we know had no metallic content, while others had.

2. The naming of the paint on the build cards as Healey Blue or Healey Grey goes well into November of ’53 (with Body numbers into the 700’s) with a few of them specifying non metallic while most do not make the determination. So it definitely wasn’t a case of sequential evolution of the paint, but seemed to be randomly making use of metallic or non metallic and not stating the difference on the build cards.

I think that reasoning is very sound and was prepared to accept that this car was painted Healey Blue aka “Ice Blue Metallic” until I started looking a little more closely.  I carefully sanded through the paint layers on the rear shut face of one of the doors and this is what I found.

I believe I was very lucky that no one had taken the time to strip this area of the car down to bare metal  and that what was revealed is indeed a true history of the paint jobs over the last 59 years.

Here is what I think happened with this car:

The panels, like the chassis from John Thompson Motor Pressings, were painted in black chassis paint probably by Dowty Bolton Paul before shipping to Jensens.  (On this car the frame colour is definitely black not “chocolate brown” as others have described theirs. Chocolate brown however is indeed evident on the back of the dash and under the gravel guard).

Jensens did the assembly and once that was finished they blew in the areas where the black had been damaged with red oxide primer before applying the finish colour to all the outer surfaces, the door shuts and presumably the inside of the boot and bonnet.

My bet is that this car was sent to a dealer and didn’t sell, possibly because it looked a bit dowdy next to the Healey Blue ones,  so the dealer gave it a quick Healey Blue paint job to move it off the lot. That is just conjecture on my part but having worked in dealerships in the ’60s I know that in New Zealand they weren’t above painting a new car completely when the customer wanted one in a different colour!!
Some time later someone decided that they wanted the car in white so it got a total exterior grey primer then white paint job, over what was there,  including blowing in the wheel wells over the previously unpainted black frame paint. The white extends right up the door face so it is unlikely it was a “add white coves” job.
Next someone decided to do a Healey Blue with red interior so they stripped the outer surfaces completely down to bare steel applied a grey primer then a coat of Healey Blue which is why Ice Blue Metallic over grey primer is all I was able to find on those surfaces.

I took the door to a guy in the paint business I have known  for years  and he picked it right away!! He said it is the same as an old  Ford colour Spinnaker Blue. He mixed some up and it is absolutely identical to that non metallic blue/grey so, unless someone can convince me that this car was not that colour originally,  that is the colour it will be when I finish it.

Any comments would be more than welcome.

The question of whether or not “Healey Grey” was a official colour for the early 100s has been discussed at length since I first posted this article. After several phone calls and emails on the subject Roger Moment was good enough to send me following which, although somewhat bizarre, sounds  as though it may be a reasonable explanation for the confusion on the subject:

“I have build sheet data for many early 100s.  much of it came form John Wheatley who copied the records when he worked at Longbridge in the 1950s.  Some I researched at Gaydon years ago.  Of some 300+ entries covering bodies up to B. 400, six list “Blue”, 47 are colors other than blue, primer, or no color is shown (my data source didn’t list the color), and the remaining 247 ALL list Healey Grey!!!! Besides, I know of B. 691 that has the color listed as Healey Ice Blue and this is a non-metallic blue paint. so, B. 133 is listed as Healey Grey and it IS a metallic blue.
The BMC Service Paint Scheme pamphlet shows for the Austin-Healey 100 (BN1, BN2) Ice Blue (Straight), Code BUL.18 (See BN.2 Ice Blue Metalli-chrome)
and for the Austin-Healey 100 (BN1, BN2); 100-Six (BN4, BN6), 3000, and 3000 Convertible (BJ7) Ice Blue (Metalli-chrome), Code BU.2 (See BU.18 Ice Blue (Straight).
There is NO mention of “Healey Grey”, nor for the various colors (grouped as Greens, Blues, Reds, etc.) under Greys there is no ?Healey Grey.
I believe that “Healey Grey” was a term that was used on the assembly line when filling out the cards, but there is NO ICI color code for it. It only shows up for blue cars among the first 400 or so Healey 100s, and never shows up again after that (and admittedly my records are incomplete).  B. 691, which is done in non-metallic Blue, is probably but one of some number of such cars.
We also know that there were LOTS of metallic Blue Healeys in the first few hundred.  I have a B&W photo taken by BMC of the Healey 100 production line on Sept 28th, 1953.  During this week cars with body numbers in the 300s were being built, and you can see from the appearance of the paint in the photo that ALL of the cars in the two assembly lines have metallic paint.Therefore, I cannot agree that “Healey Grey” is either a special color OR the non-metallic blue used on Healey 100s.”

So although this does not really do much to explain the unusual original colour on #174 it sheds some light on why the colour is denoted as “Healey Grey” on the Heritage Certificate.