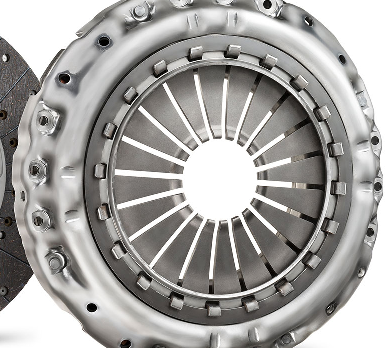 AN INTERESTING THING ABOUT CLUTCHES

I purchased this car many years back and use it quite a bit in the summer months. It is absolutely stock and a real pleasure to drive however, a couple of years back, the clutch started to give some trouble.

If you know all about clutches you can skip the next bit because it is just a primer for those not familiar with how they work.

Modern clutches, that is clutches designed after the mid sixties, are called “diaphragm “clutches.

This type of clutch replaced the “spring” clutches in use at the time because they were less complex, lighter, stronger and cheaper to make.

Because they are friction devices all clutches are subject to wear and, when they wear, they fail to transmit the torque to which they are subjected and start to slip.  Because the diaphragm spring, which provides the clamping force in the clutch has a very limited range of movement these clutches tend to slip when they get worn.

Because the VR4 is all wheel drive and produces over 300 BHP the clutch is a pretty substantial unit that it uses a vacuum assist unit to decrease the required pedal pressure.

The problem I encountered was that the clutch pedal was getting harder and harder to depress but the clutch was starting to slip under high loads. My initial suspicion was that the servo assist unit was starting to fail but, when I expelled the entire vacuum and tried to operate the clutch without its assistance I could hardly press the pedal to the floor with one foot. When I tried this with the clutch in a friend’s Stealth Twin Turbo, essentially the same car, the pedal was noticeably heavier without the servo assistance but could still be operated, with difficulty, with one leg.

These symptoms just did not add up. All my experience prior to this had been with British cars. In those cars clutch slip was always associated with a decrease of required pedal pressure because as the clutch slipped it overheated and weakened the diaphragm spring.  In fact I’ve seen MGB clutches which have been overheated to such an extent that the diaphragm spring had become a flat limp piece of blue steel which had absolutely no resilience at all!!

The symptoms exhibited by the VR4 clutch bore no resemblance at all to what I was used to.  Finally, despite my policy of diagnosing a problem before trying to fix it, the clutch became unbearably heavy so I decided that I had no option but to replace it to see if the problem went away.

I changed the clutch, not my favorite job on any car and particularly difficult in the AWD VR4 and voila, everything was perfect…

So…what was wrong with the clutch I removed? It appeared to be the original and although the friction disc was well worn it was still in very good condition with no sign of having been overheated.

The issue was that as a consequence of the clutch disc becoming thinner due to wear the Diaphragm spring was extending further “out” than it was designed to. A characteristic of a “Belleville” washer spring is that the force required to compress it INCREASES as it aproaches its relaxed condition. Lesson learned.